Well, despite my best intentions, another long delay between posts here.  I’ve not been very successful in my resolve to stop waiting for a perfect topic or direction – or something with some jaw-dropping insight.

Today, back to the my original goal of getting rid of some stuff.  I have decided it is time to par down on my t-shirt collection, particularly since I rarely wear t-shirts except when I am doing some work in the workshop or around the house.  This has not stopped me from collecting and saving enough of them to overflow the drawers and to fill too large containers in my off-season attic storage.  Needless to say, I’m not going to address that all in one sitting  This weekend, I plan to switch the winter and summer clothes and that is always a good time to pare down and regroup.  In prep for that effort, I thought this would be time to tackle the 3-drawers that are stuffed to overflowing in the guest room. 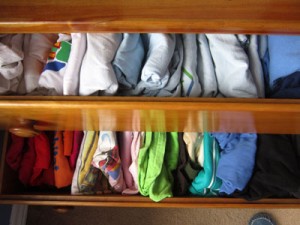 One of the reasons that I keep holding on to the accumulated T-Shirts is that most were collected at an event or for an occasion. Most stand as testament to some affiliation or achievement.  As such, it can be hard to part with them and when I have thought of donating them, I think that they wouldn’t really have meaning for anyone not connected to the same event.  As I was sorting through, however, I realized that some still held strong positive memories but many, not so much.  I dedicated an hour to these three drawers, set an alarm, and determined to work quickly (not my forte) and get a start on the reduction.

Here are the outcomes:

I decided to cut the logos/images off the T-Shirts that were valuable memories but no longer worn.  I’ll collect them up and make something of them in the future.  Perhaps a quilt or wall hanging.  In the meantime, I drastically reduce the space required AND still have the reminder of the associated event.  I cut the rest of the shirts into strips for rags for the workshop and garden shed, where they will be put to good use.  An unexpected bonus of this approach is that some of the well worn shirts would not last

much longer and this way the most important part of the story is preserved.  I turned this stack of shirts… 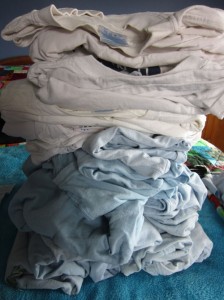 …. to this collection of images and pile of rags. 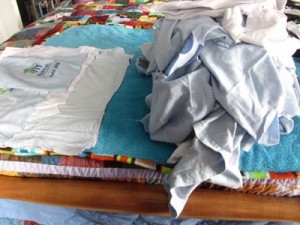 I reduced the number of shirts in the drawers dramatically, leaving only ones that I continue to wear when I exercise or do work around the house or garden. 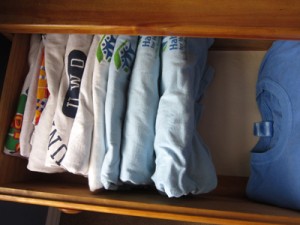 I put clothes that no longer fit or suit, as well as a number of T-shirts that I realized didn’t really have an emotional attachment but are still in good shape – in a bag to donate  While I was at it, I collected some items already set aside for that purpose and bagged those up too.

Result – 1 1/2 garbage bags of clothes and a bag of bed clothes taken out to the car to drop at Value Village on my next trip to the city.

In just over an hour, I cleared some space in the drawers for the inevitable seasonal clothing change later in the week.   Maybe I’ll put some unused T-Shirts back in rotation – or I might even take the plunge and cut some up or donate them rather than just putting them back in storage.

What do you do with all those T-Shirts from runs, school events or promotional activities?  Do you wear them?  Use them for night shirts? Donate them?  Discard them?  Share any suggestions in the comments.

It is increasingly easy to amass huge selections of photos and then find yourself spending long hours flipping through looking for a specific memorable image or trying to find one to illustrate a particular post or article.

I long ago lost count of how many images I’ve shot digitally.  PLUS I am of an age that I also have 20+ years of negatives and prints that I have been scanning to create printed  albums as a supplement to all the online collections.  My thinking is that getting the pictures in albums allows me to reduce the number of negatives and duplicate photos.

Not long ago, I took advantage of a sale from a scanning service and had more than 1500 prints scanned, which was a big boost to digitizing my collection of old family photos.  Adding those images to my digital records is a good reason to review and update my filing system.

My own photo filing system is in serious need of review and refinement. Every time that I go to do a layout or gift project, I’m spending way to much time trying to find a certain picture that I have in mind, or waiting to be inspired by the right image for a project idea.  I have set a target to complete 4 of the photo books on my  to publish  list by the end of 2017.  To do that effectively, I need to streamline my process so I can spend time designing books rather than searching for the right photos.

Whatever system that you develop has to include backups.  It is devastating to lose pictures.  I speak from experience as last year I lost the better part of two years worth to a system crash.  I don’t like to think about it.  sniff.

Here are a few organizing tips for tackling your digital photo collections:

“Begin at the beginning,” the King said, very gravely [to the White Rabbit], “and go on till you come to the end then stop.”
― Lewis Carroll, Alice in Wonderland

I would love to hear your strategies and tips for photo organization.   Please share any tips or resources.

What are your goals for photo management.

I’ve broken my Keep The Stories project to a two part challenge. The first step is to capture the moments so you can tackle the second part and reduce the “stuff”.  It’s a simple idea but not always as simple in practice.

Find ways to capture the stories of your life – from the everyday routine to the once-in-a-lifetime moments. Express your stories in ways that work for you. Use the same approach or mix it up as the mood strikes you. Use one style or many, in sequence or in combination.   Keep your creation private or share it with the world in print or online.

How will you capture your moments?

Once you have captured the story, it is time to let go of the stuff.  Having a ritual might help.  In my case, I’ve decided to tell the next chapter and include what happens next to finish the story.  I’ve created a worksheet for telling the stories and have a section for the next step for each item. So far I’ve   identified donate, reuse, recycle/freecycle (http://www.freecycle.org/ to find a location near you), trash (sometimes it is the best or only option but I use this as my last resort).

I am accepting that it isn’t necessary to keep the things we associate with memories and finally getting rid of the stuff, though there is a still a way to go.

Take the challenge to keep the stories and lose the stuff.  Reduce the clutter, reorganize and change the way you think about the things. Recycle, repurpose or donate.

Do you have rituals that help you let things go?  Share in the comments.

I’m a collector. Some might say pack-rat is more accurate but, to be clear,  I don’t keep everything indiscriminately; I am big on recycling, reusing and donating. My problem is that I keep too much because I struggle to part with things that were gifts or that are associated with a trip, event or occasion.

For years, I have most often captured memories pictures and memorabilia. I am able to evoke many wonderful experiences – and some not-so-wonderful ones – by looking through these collected photos and artifacts. This can be nostalgic, even comforting. But there is a huge downside to this approach in that it tends to make it hard to let go of things because they evoke memories of people, places and activities that have been important.

In the past, I would start with the best of intentions to par down the various flotsam and jetsam accumulated through my life, an effort that more often than not ended with me traveling on a trip down memory lane perhaps making, at best, a small reduction in the amount of stuff.  Sometimes I convince myself that I might use /display / repair / re-purpose some particular item but usually it just went back in the box.  Which inevitably meant that I still needed to keep the box, even when I reduced the number of items it contained. I was eager to get more space and clear the clutter but struggled with letting go.

Recently, it hit me.  It is so simple! I don’t know why I didn’t realize this years ago.  In fact, I did realize that but didn’t take action on the connection.  What I am really collecting is stories.  I don’t need the stuff to keep the stories.  Instead, I need to make sure that I record the stories so I can release the associated things, hopefully to a new life out of storage and to use as intended.

And from that  realization, the origins of my Keep the Stories project.